Some years ago i made some sketches for a Tintin pastiche in which a Fiat 130 Coupé would play a role. It was called ‘ Kuifje in Houten’, named after the Italian car show in Houten where the story took place. One of the pages in the story showed Tintin and Haddock making an emergency stop in a 130 Coupé in order to avoid a collision with absent-minded Thomson and Thompson (Jansen en Janssen) on a vintage Italian scooter, coming from a different direction. On the next panel should have been an overview of a giant crash in which all sorts of ultra-rare italian cars were destroyed.

It can’t find it anymore but i found two panels of a different story in which also a Fiat 130 coupé was supposed to make an appearance. Unfortunately i didn’t finish the drawings and don’t remember the plot anymore. Anyway, maybe i’ll find the Kuifje drawing some other day. 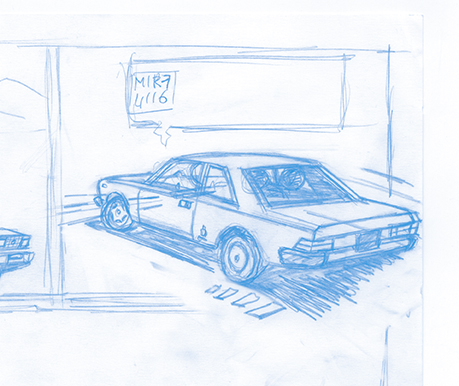